Its not been a week since the iOS 7.0.1 update was released for Apple iPhone , iPad and iPod touch . Today apple has released another update for the iOS 7 devices . The new iOS 7.0.2 update patches a major security risk on all the iOS 7 devices and add a new feature . The update is now available for all apple devices which includes the Apple iPhone 4 , iPhone 4S , iPhone 5 , iPhone 5S and the iPad and iPod touch . 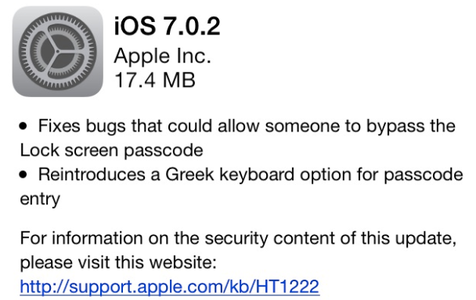 The new ios 7.0.2 update now Fixes up a bug which allowed anyone to bypass the lockscreen passcode and access your photos , text messages , email ,twitter and even make calls . Also The new update Reintroduces a Greek keyboard option for passcode entry .
Its highly recommended for everyone on the iOS 7 or iOS 7.0.1 update to update your apple devices to the new update immediately . you may manually check for the latest iOS 7.0.2 update on your by tapping Settings > General > Software Update . The update is a 15 to 17 MB update for most devices .You can download the latest iOS 7.0.2 manually update your respective apple device from the links below  .
iOS 7.0.2 Download Links:

Like before apple has been very swift to address the issues on its iOS devices , another great reason why most people choose to be loyal to apple . Download the latest iOS 7.02 update and share the news with your friends .