Samsung has announced the much awaited Galaxy S5 at the Mobile World Conference in Barcelona last month. As usual, diehard Samsung fans expected the flagship smartphone from Samsung to come preloaded with impressive new features that should have been out of the world. While Samsung managed to impress many, there were still many others who were left salivating for more.

Among the many newly introduced features on the Samsung Galaxy S5, The Heart rate monitoring feature is something that caught a lot of attention from the public. While it might seem to be an exclusive feature on the Galaxy S5, but you will be surprised to know that heart rate monitoring feature has existing for a couple of years.
I suppose Samsung must have been running out of features to brag about and which is why they implemented the heart rate monitoring feature on the galaxy S5. Basically any android phone with a camera and a flashlight can be turned into a heart rate monitor with the help of the many free apps available on the Google play store.
For those who want to turn their android phones into a heart rate monitor, I will show you how you can do so without even spending a dime. The Google play store is filled with many of these heart rate monitoring apps, but here’s one I would personally suggest you.
Courtesy of Instant Heart Rate, a free android app, your android phone can now be turned into a heart rate monitor. You might be skeptical at first, but after you use this app, I am definitely sure, you’ll be blown away.
Using the app is pretty simple, you just need to place the tip of your index finger on your phones camera lens and then tap on the measure button. The app will then count the changes in the tip of your finger and then calculate your overall beats per minute. The whole process usually takes about 10 to 20 seconds and it greatly depends upon the brightness of your phone’s flash. For better results, you need to do this in a well lit room. 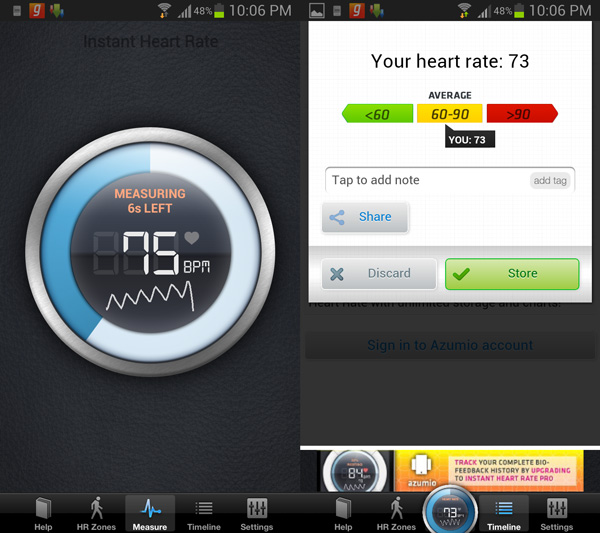 Although the app specifies demands a android phone with a flashlight for best results. But if your phone doesn’t have a flashlight, you can use the light from any light source and the app will just work fine.
However, one important question that arises is, can you trust the app? To be frank the app is just an alternative for a real heart rate monitor and in some cases the readings are not 100% accurate. If you want accurate results, you are better off with the traditional methods that actual doctors use. For this, you can place your fingers on your wrist or your neck and then count the pulse for 30 seconds and then multiply it by two. Now you would have an accurate reading of your heart rate.
Download: Instant Heart Rate for Android
Here’s a video demonstration of the Instant Heart Rate app.

Nevertheless, Instant Heart Rate Monitor is a handy app, that every health conscious user should have on his Android phone.