Motorola has finally launched the Moto E dual sim budget android phone in India under a price tag of Rs 6,999 ( approximately $116 ). The smartphone will be exclusively available through indian e commerce giant Flipkart. 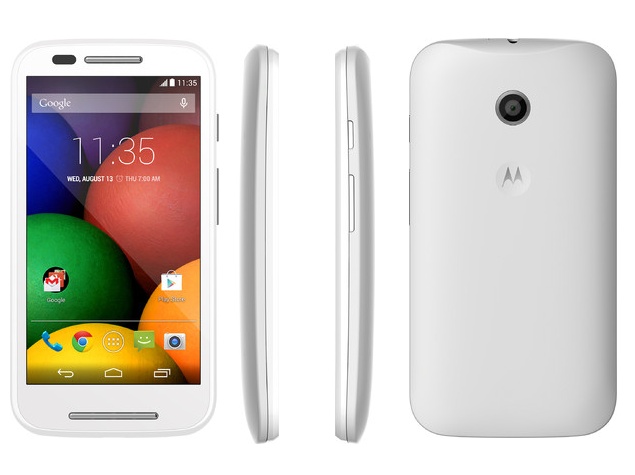 The Moto E is Motorola’s third device in India, after the Moto G and Moto X, both of which sold well in India.
Click here to buy the Motorola Moto E from Flipkart.
The Motorola Moto E is powered by a 1.2GHz dual-core Qualcomm Snapdragon 200 processor along with Adreno 302 GPU alongside 1GB of RAM. The Phone is dual sim capable, however it only supports Nano sim.
On the front the smartphone comes with a 4.3 inch qHD display which has a display resolution of 540×960 pixel and 256 ppi density. The display is protected by the latest corning gorilla glass 3 and motorola’s ‘water-nano coating’ which makes it water resistance, though you should know that its not waterproof.
For shutterbugs, the smartphone has a 5 MP rear facing camera, however to our disappointment, it doesn’t have a flash or a front facing camera. As for storage, the Moto E has 4GB of internal storage and an option for expandable storage via MicroSD cards upto 32GB.
The smartphone is backed by a 1980mAh battery and comes with several connectivity features such as 3G, Wi-Fi 802.11 b/g/n, GPS with GLONASS, Bluetooth 4.0, Micro-USB, FM radio and 3.5mm audio jack.
According to Motorola, the Moto G will be running Android 4.4 KitKat out of the box and it will also receive the latest and further android updates.

Thanks to the great response in India, the Motorola Moto E will be available first in India, followed by launches in other countries. Buyers will be also able to choose from 9 colourful rear shell options for the Moto E including Black, Lemon, and Turquoise.
With all these hardware, the Motorola Moto E is definitely a game changer for the indian budget smartphone market. With the Moto G priced at Rs. 6,999, you are getting more that what you can bargain for. Since It’s a budget smartphone, i won’t be complaining about the missing front facing camera and the rear flash either.