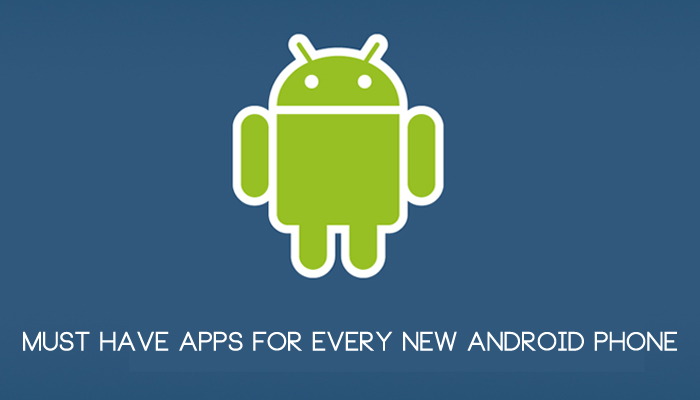 Essential and Must have apps for every new Android phones

MXplayer : When it comes to watching movies and videos on you phone , MXplayer is all you need have on your new android phone . Its like VLC player for windows , throw any video format on it and it will play them without any hiccups .With MXplayer you can Connect your android phone to a network and stream any video files from the devices in your network . MXplayer also has support for hardware and software decoding of video files while utilities the graphic processor on your android phone and helps to play high resolution videos smoothly . Mxplayer is always one of the  Must have apps on a new android phone .

Google play music : The default music player on android phones does a good job playing music and audio files but if you need something good looking and with additional features , you can try out the Google play Music app on your new android phone . The Play music app allows you to purchase and store music online and can be streamed to your phone from anywhere . So no more worrying about storage space . You can also listen to radio on Google play Music without any limits . Apart from that the Google Play music app even has a widget that allows you to control your music library from the home screen itself . Google play music is always one of the  Must have apps on a new android phone .

Read: How to Ring , Erase or Find your Phone with Android Device Manager.

Read: Is your mobile lost , trace it back now with Androidlost.

Runkeeper : This here is one of the most interesting app on the Play store , I have to admit that , it was Runkeeper that got me to get early and take to jogging every day . Runkeeper is like a personal trainer . It enables you to keep a track of how much distance you run everyday and even estimates the calories burnt accordingly but Runkeeper requires continuous use of GPS which may drain your phone’s battery faster . So on an average using Runkeeper you can have a jogging session over a span of 4-5 hours till your battery drains out completely .  Runkeeper is always one of the  Must have apps on a new android phone .

Whatsapp : If you are looking for a app to send message for free , then you must install Whatsapp on your new android phone . Whatsapp is one of the most downloaded app on the Play store . Whatsapp allows users to send unlimited free messages to any phone having whatsapp installed . Apart from messages , it also allows sending pictures , videos and other files .  Whatsapp is always one of the  Must have apps on a new android phone .

Google+ Hangouts : The Google talk app has now been replace by the new Hangout app . It can do everything that Google talk could do plus with the integration of some new Google+ features like one to one video chats and even with a group . If you like to have video chats , then do get this app on your new android phone .

Opera mini : I consider Opera mini as one of the best android web browsers . Not only for android but for all phones and devices . If you have a slow data connection or a data connection with monthly limits , then the Opera mini web browser is what you need . When  you use opera mini , the browser automatically converts all the websites to fit your phone’s screen and reduces the webpage’s size  . Most of the work here is done by a host of servers that do the actual job of compressing websites and sending it to the Opera mini browser . In Fact opera mini can be termed as the fastest web browser .  Opera mini is always one of the  Must have apps on a new android phone .

Google Chrome for android : The stock android browser might differ across various android phones . For browsing the internet on my Android phone  , I prefer the Chrome for android web browser . The most important reason being that the Chrome browser on android allows you to sync your bookmarks from your pc . All you need is to sign in into Chrome using your Gmail id . Further it allows websites to be opened in tabs and even features like auto fill . If you’re using chrome on your computer then you must have the chrome app on your new android phone .

File hide pro : Everybody has a something private that they want to hide it from everyone . It can be guilty pleasure like an embarrassing picture of you and your friends or anything similar . you want to keep them on your phone but at the same time you want to hide them from few others . for this you need to take the help of File hide pro . File hide pro is an android app to hide files and folders on your android phone . Once hidden with file hide pro your files will not be visible anywhere else , including computers and laptops . The most interesting feature of this app will be the ability to disguise itself in an “ tip calculator “ app . a small and innovative feature to keep your private data safe from prying eyes . Another  Must have app on a new android phone .

App lock : there are a lot of apps on my phone that i don’t like to be opened by other people . take Gmail as an example , nobody would want their mails to be read by someone else . If you need to restrict apps like these from others then you can use a free app called App lock that enables you to lock any app on your android phones with a password . So even you are not not around your phone , nobody can have access to your private data . App lock is surely another must have app for every new Android phone .

These were my list of the must have apps on any new android phone . While the list is not complete , i will add more apps to this list as i keep on trying out new apps from the Google play store . If you have any suggestions then feel free to express them in the comments below .